I’ve been noticing a lot of websites and online classes have been popping up lately promising to teach aspiring young women the “art” of financial domination and how to make money. I personally think those tutorials are a scam and I can sum it up for you in a simple blog post. 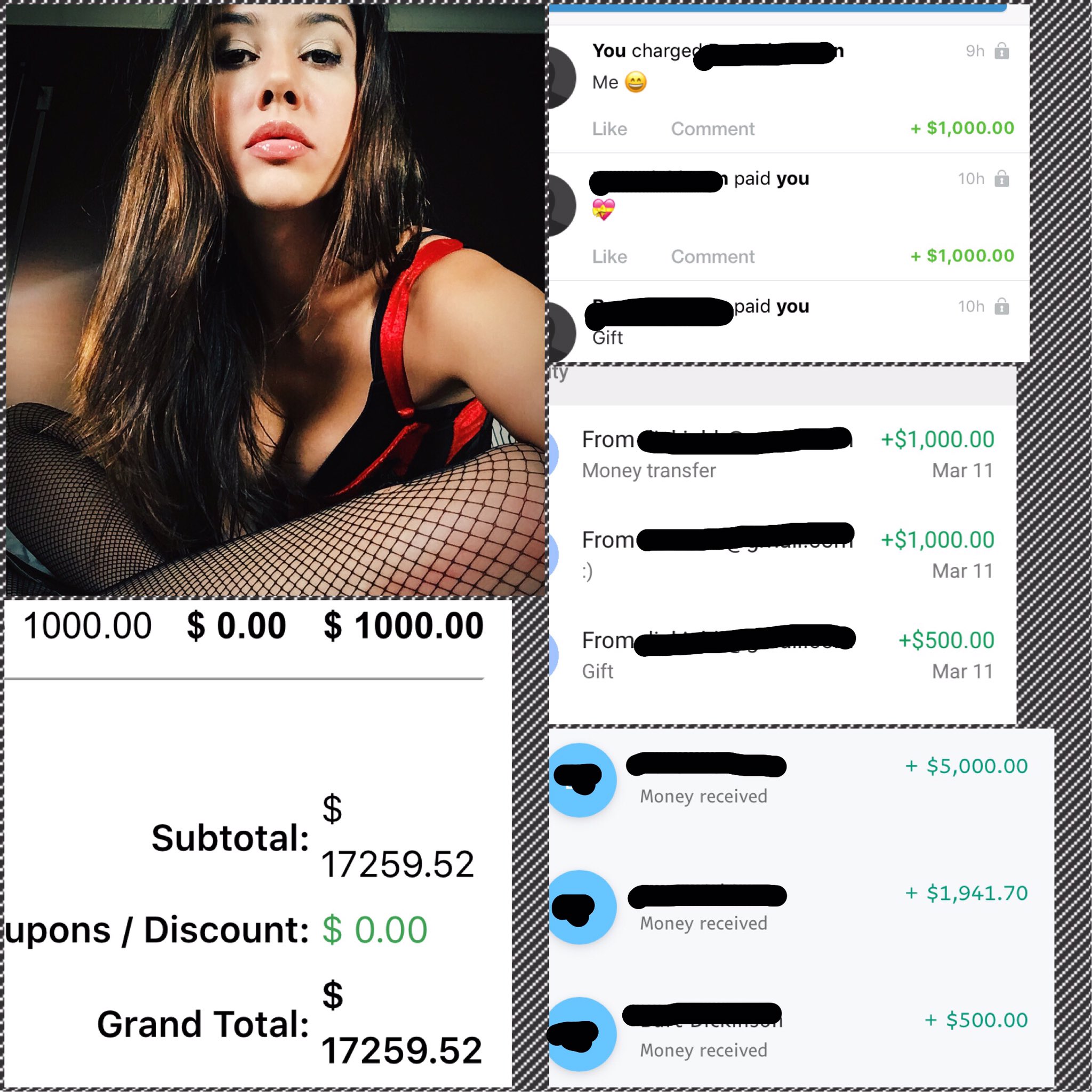 Definition of financial domination: when a submissive pays a dominant money for the sheer pleasure of paying her in it of itself. i.e. no direct transaction is assumed.

The problem: as you could imagine, there’s a lot of supply for very little demand. Most people like easy money. Very few get off on giving their hard-earned dollars away.

So how does it work?

I don’t mean they have a vanilla job (although some do, I don’t). What I mean is, they provide services to fetishists through clips, cam shows, phone lines, and selling worn items. This is not financial domination. These are business transactions. It’s work.

(Note: some people debate whether any of this is “real work.” That’s fine. But in my opinion, whenever you’re trying to earn money by spending your time doing something when you’d rather be vacationing, reading a book or hanging out with friends: that’s work.)

So, where does the financial domination come in? Let me show you a graph. 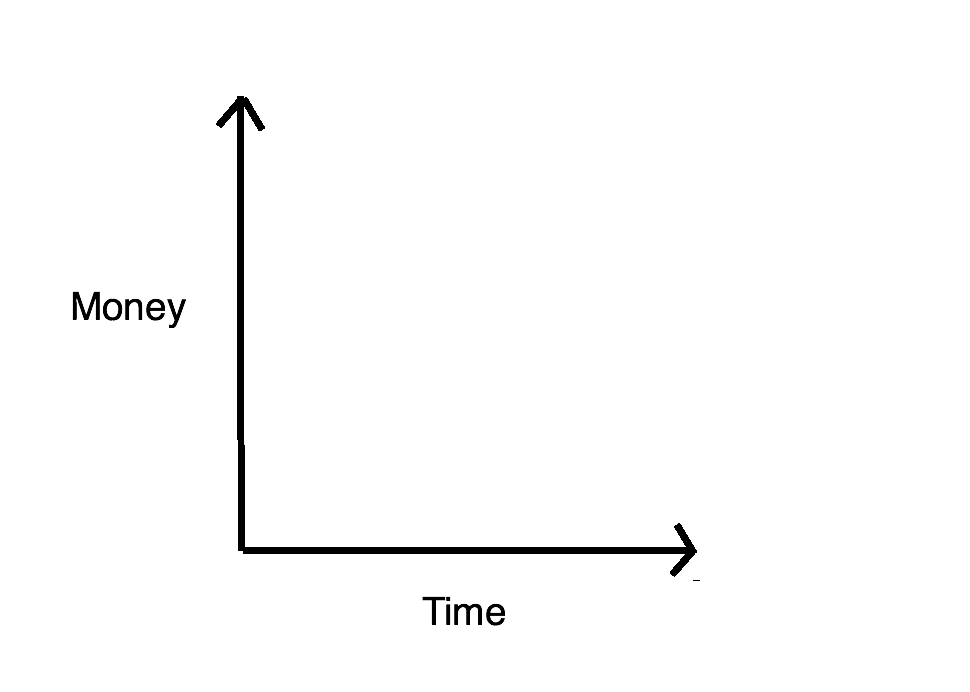 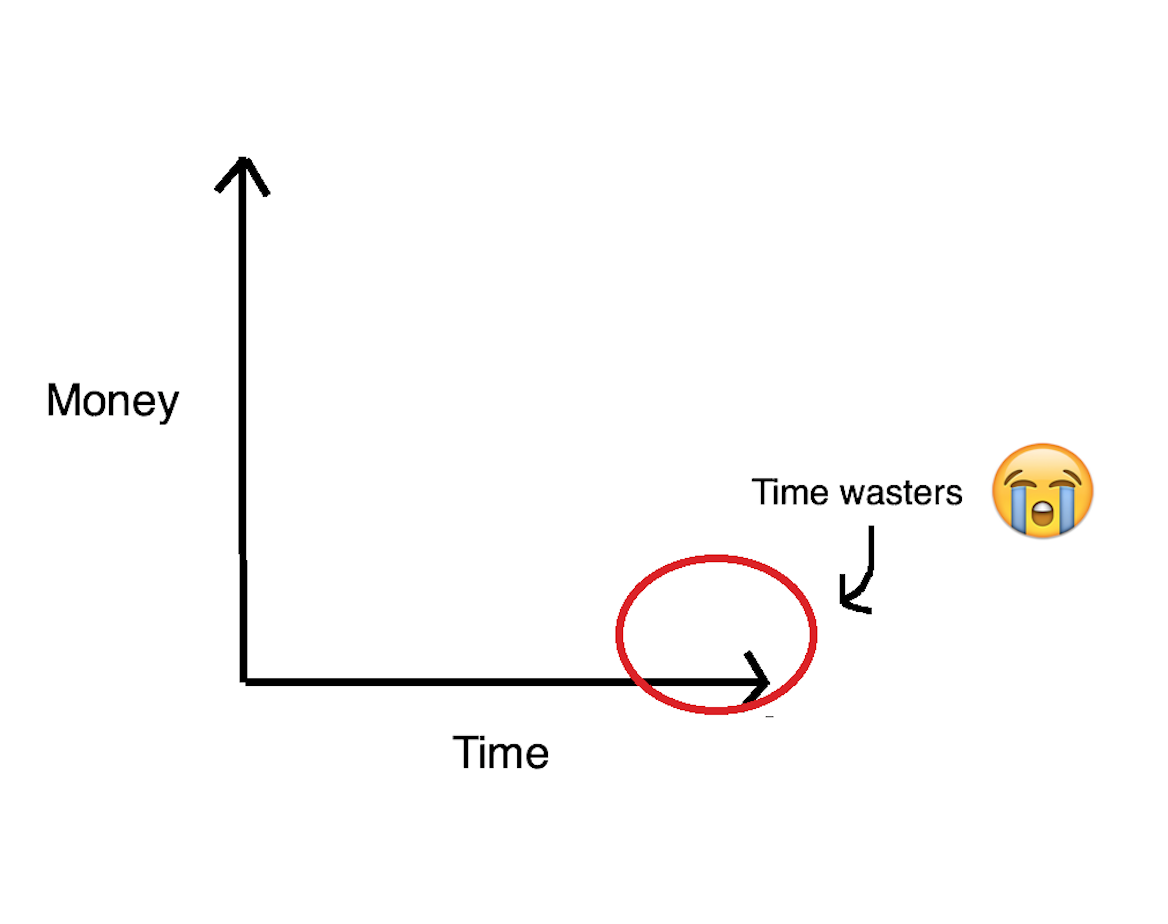 The bottom right hand side of the graph is the “time waster” zone. These are guys who suck up your time and energy through email, messenger or what have you and give you very little or no money. 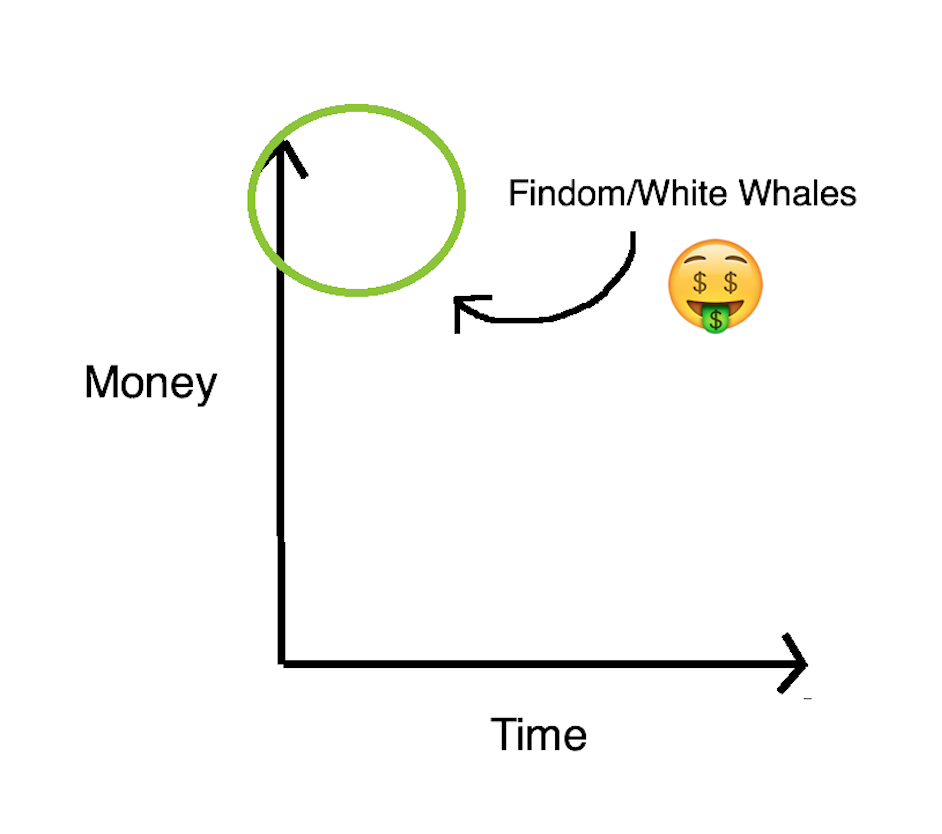 The upper left hand side, is the financial domination or “white whale” zone. A white while is a sub who spends a lot of money and requires very little time on your part to do so. For instance, the slave X.

Slave X literally asked for nothing in return for the money he sent me. Although I interacted with him somewhat to keep the money flowing. It was incredibly easy. I simply chatted with him over kik and threw him a few pictures here and there as a reward. It’s didn’t hinder my day what so ever. I was able to eat breakfast, work out, go shopping, and shoot eight videos, all while draining him of his money.

Yes, that is fucking rad.

Make no mistake about it: if, for the past ten years, I only had the money I earned through financial domination, I’d be living in poverty.

That is why, the most important part of the graph is this line: 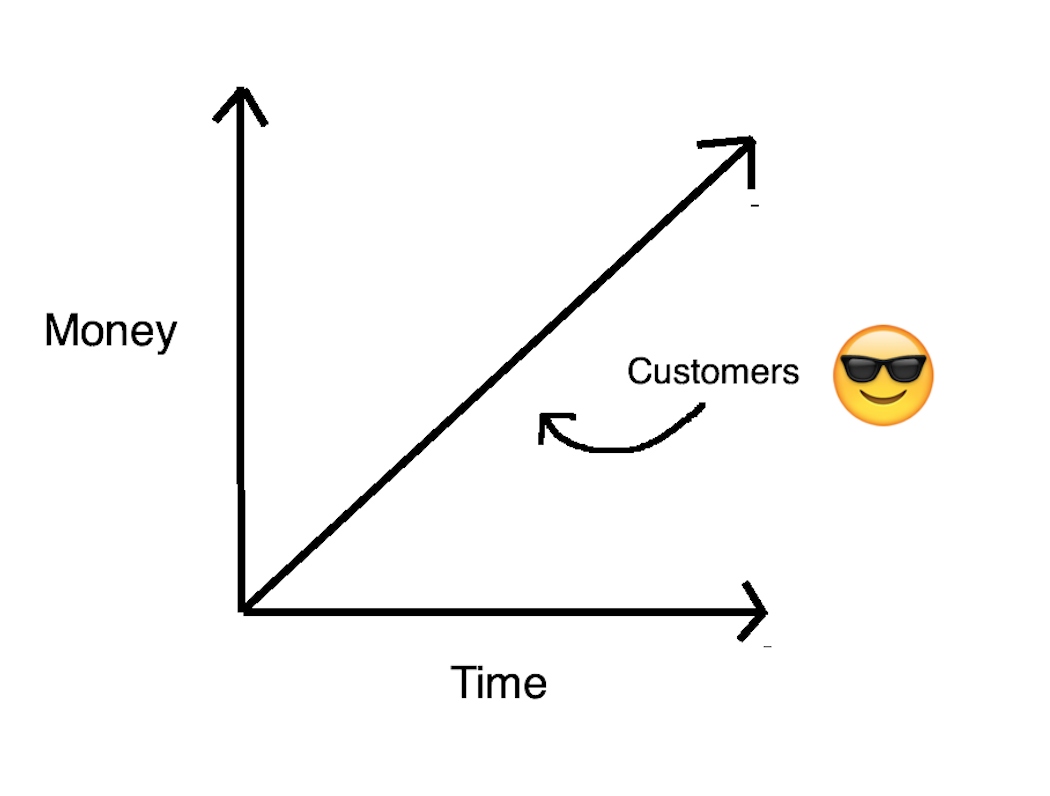 This is the customer line. The free market line. This is where time spent and money earned is fair and equitable. This is where you earn money for clips, webcam, phone lines and worn goods. This is what you should be putting your time and effort into.

The mistake most new financial dommes make is this:

They hunt for white whales.

They make a twitter account, throwing up a few pictures of their feet and saying “fuck you pay me.” Then, when the subs start flocking to them, they spend all their time interacting with them, like a slot machine in desperate search for that big pay out. Or they try to gain the attention of subs who have been known to pay other dommes.

If you hunt for white whales, you will find yourself in the time waster zone.

Time is a precious resource, don’t spend it like this.

Do not interact with a sub for more than five or ten minutes if he’s not paying you.

Do not solicit subs on social media who are known payers.

Spend your time and energy on the customer line.

This is how you get the occasional white whale, when you produce and offer services. White whales get inspired to pay dommes when they see a certain video, experience a great cam show or phone conversation, or they see a specific image on social media. Slave X started paying me when he stumbled across my clip store. If that didn’t exist, he would have gone elsewhere.

Another example: a couple years ago I wrote about selling my shit twice to someone for $8k. It was discussed at great lengths during my Joe Rogan interview. Afterward, I received an influx of emails from baby dommes (and delusional men) asking me how they could sell their shit online. As though shit is a scarce resource and there’s a lucrative untapped market that’s so plentiful Im just dying to share it with everyone.

There isn’t. I don’t sell my shit for $4k all the time. I sold it twice in a ten year period.

Although the shit buyer wanted something in exchange for his money, I’d still consider him a “white whale” because he over paid by an extraordinary amount. He could have easily bought shit from a cute, broke 19 year old for $30. The point is, he didn’t want cheap shit. He wanted my shit. He’d been watching my clips for years and came to the conclusion my shit was special and worth $8k. It was an indirect result of the decade worth of work I’d been doing. Not because shit is worth $8k.

Unfortunately, you never know what is going to inspire a white whale to come to you. If there’s a formula or science to it, I certainly haven’t discovered it. That’s why it’s important to think of the customer line as a net. The more you produce, the more services you provide, the bigger the net and the more likely you are to catch a white whale.

Best of all: the net is profitable in it of itself. You will earn far more money from your net then the occasional white whale you catch with it.

Remember: be realistic. They’re called white whales for a reason. They’re rare. They pop up once in a great while, then they often disappear for long increments of time. Take advantage of them when you see them, but don’t depend on them. Don’t assume they’ll be a regular paying sub. I’ve known Slave X for a while now. I’ve gone years without hearing from him. Yesterday he told me he wanted to adopt my $1,500 mortgage bill and be a devoted slave, I’m not holding my breath on that promise. I’m going back to work.

Finally, a last bit of advice: I know it’s hard when you’re first starting out. It’s a strange world. What the hell are all these fetishes? What do you say to guys? How do you “dominate them?”

This is how I learned, you can too. It’s a tool I use to this day. I have produced over 1500 clips. I shoot four new ones a week. As you can imagine, it gets hard to come up with a fresh spin on ideas. Whenever I’m feeling stuck, I do cam and phone and formulate new ideas from the guys I get paid to talk to. That’s the beauty of this business: all the revenue streams feed off of each other. It’s like an evolving ecosystem of perversion. 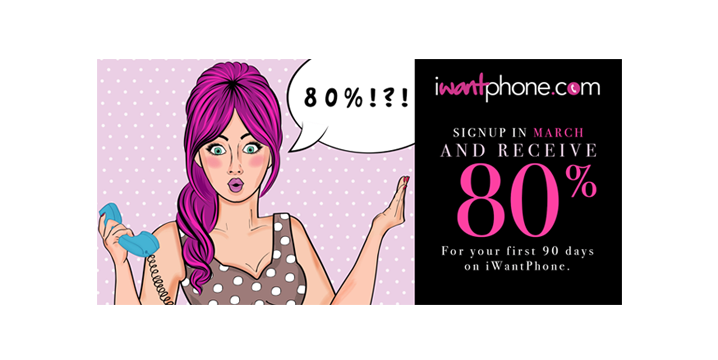 Right now, IWC is offering an 80% commission rate for their new phone platform they’re launching if you sign up in March. Get on it. This is the highest rate in the industry and IWC is a fantastic company. Join here.

This entry was posted in Uncategorized. Bookmark the permalink.

This site uses Akismet to reduce spam. Learn how your comment data is processed.