So, I did something I had never done before the other day: I gave someone 10 free minutes of cam. Fucking nuts right? If you would have told me 20 minutes before the fact that the guy on skype who barely spoke English and was trying to hustle me out of a free 5 seconds cam peak would have me endearing him within minutes I would have deemd you preposterous. Anyone who’s spent more than a few minutes trying to talk to me with out paying knows I have no patience online. When it comes to language barriers I know I should be more understanding, but I’m not, and tend to treat foreigners the same way I treat those who don’t have the same excuse (you know, stupid people.)

He eventually did throw down $100 for a small penis humiliation cam show. Not surprisingly, his spoken English was even worse than his writing, but he certainly wasn’t shy. He jumped up and down enthusiastically, vigorously shaking his tiny cock at me and making talk like a puppet in his goofy arab accent,

His face was animated as he wiggled his pinky at me and scrunched his nose in disgust, then laughed at himself. I’m pretty sure all that is suppose to be my job, but didn’t mind. It was the first time in a long while that a guy legitimately amused me on cam.

He paid another $100, which bought him 20 more minutes, but within the first 5 his bright jovial face fell into that concentrated look as he squirted a surprisingly large load of his his 3 inch mound. He mentioned he liked CEI at one point, so I told him to clean it up with his tongue. He nodded at me like he understood but obviously didnt, so I repeated, “EAT..YOUR…CUM..” in that very slow and deliberate way people speak when they’re talking to a foreigner.

He let out a big sigh and kinda stared at the ground for a while. His demeanor completely transformed from bouncing jester to sad clown painting.

We talked for a bit about where we were from. He said he lived in Abu Dhabi but was in Paris for 6 months. He probably explained why but I could barely understand half of what he was saying. I asked him if he was Muslim. He said he was, but not a very good one right now, he would have to make up for it later.

Then he told me I should visit Dubai because everyone there is so nice.

I asked him if I’d have to wear a veil over my hair if I visited, but he interpreted it as me asking about his turban and ran off to go put on and show me. He plopped it loosely on his head and smiled for first time since he blew his load. I smiled back.

He got excited that I seemed to take some interest in him and started searching his computer for a picture to show me. I realized at this point we were well passed the 20 minutes he paid for, but I didn’t mind. It felt like those rare connections you make with locals when you’re traveling abroad that largely define your trip (minus the tiny dick and balls.)

“Doo yoo tink aye am aye looser?” he asked as he looked for his picture.

I paused for a second to think of how to phrase my response so he’d understand. In retrospect, a simple “no” probably would have been suffice.

He nodded in a way that probably meant he didn’t really understand and continued searching. He then sent me this:

[Image of him in front of Burj Tower removed by request]

I told him yes, that I had been there and knew it very well. He seemed surprised, so I showed him a picture to prove it: 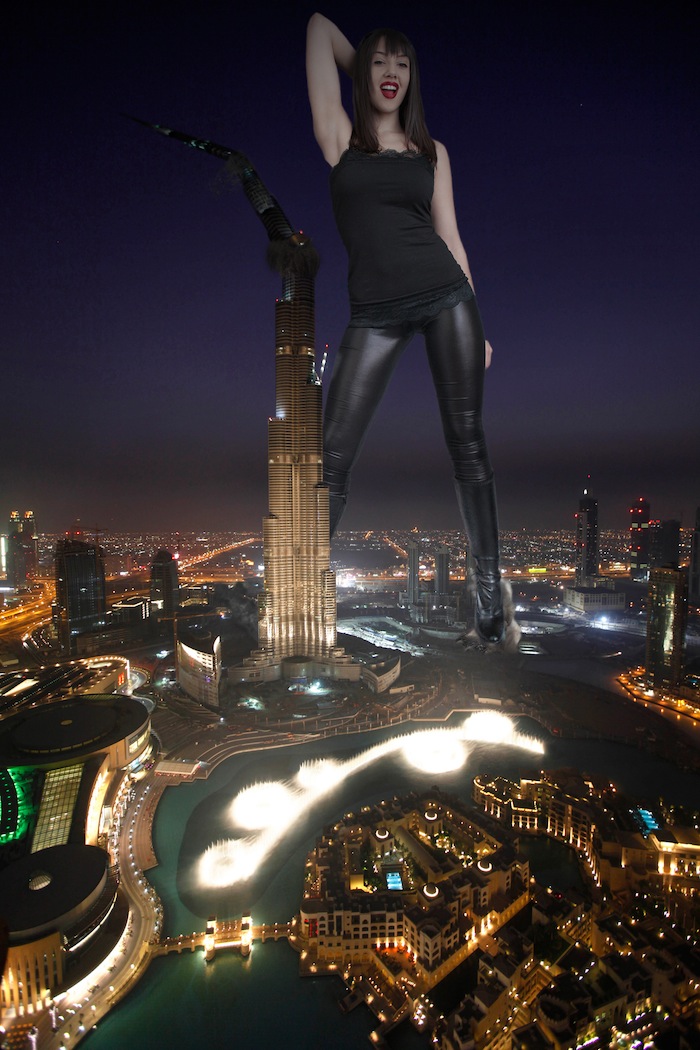 He fell over giggling.